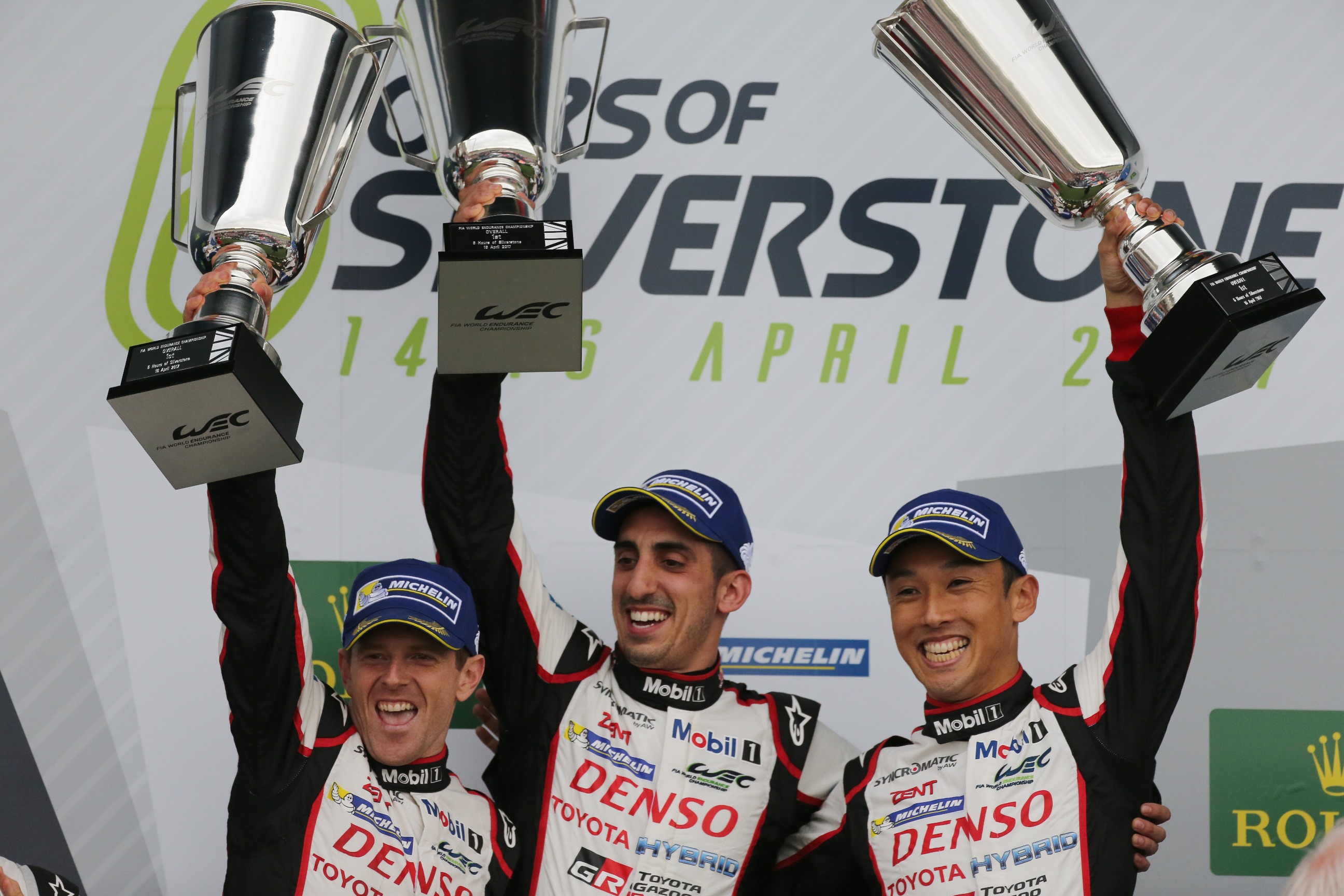 Sunday 16 April 2017
TOYOTA GAZOO Racing scored a dramatic victory in the 6 Hours of Silverstone after a thrilling opening round of the 2017 FIA World Endurance Championship (WEC).
In a race defined by several rain showers, the #8 TS050 HYBRID of Sébastien Buemi, Anthony Davidson and Kazuki Nakajima earned victory inside the final 15 minutes in front of 50,200 spectators (weekend figure).
As well as the usual winners’ trophies, the #8 crew also claimed the Royal Automobile Club International Tourist Trophy, first awarded in 1905 and won by motorsport legends such as Tazio Nuvolari, Graham Hill and Stirling Moss.
The pole-sitting #7 TS050 HYBRID of Mike Conway, Kamui Kobayashi and José María López set the fastest lap of the race but lost over an hour due to an accident and finished 23rd. José María visited the circuit medical centre and then travelled to hospital for a precautionary scan which confirmed he suffered no injuries.
Although the race started in cool, dry conditions and the two TOYOTAs ran in first and second, the weather soon intervened; after 45 minutes a shower struck and light rain fell intermittently after that.
Close to the second pit stops, the #7 suffered an anti-roll bar problem which created handling difficulties and caused Kamui to lose performance and drop to fourth.
Anthony, now at the wheel of the #8, took over the lead and a battle with the #2 Porsche. But with two hours completed, the weather worsened and created a very challenging situation.

Both TS050 HYBRIDs stayed on slick tyres throughout, unlike the Porsches which switched to hybrid intermediates. Kamui lost time in the gravel when the rain was at its heaviest, while Anthony in the #8 initially slipped to second.But as the conditions improved and the Porsches made an extra stop for slick tyres, Anthony reclaimed top spot. More rain came just after half distance, which caused the end of the #7 car’s challenge. José María, fighting a car with difficult handling, crashed into a tyre barrier at speed, causing extensive damage to the front and rear.

He brought the car back to the pits and the mechanics worked hard to repair the damage. After 66 minutes in the garage, Mike brought the car back on track in 26th.
That accident brought out a safety car and significantly reduced the #8 car’s advantage over the #2 Porsche. The close fight continued throughout the final two hours, setting up a grandstand finish, with Sébastien at the wheel for the last stint.
When the #2 Porsche emerged from its final pit stop, with 30 minutes remaining, its lead was only eight seconds. Sébastien hunted down the lead with a series of quick lap times, even as more drizzle fell, and eventually overtook with only 12 minutes remaining, taking the win by 6.173 seconds.
The team now prepares for the second round of the season, the 6 Hours of Spa-Francorchamps in Belgium, the final race before the Le Mans 24 Hours. Spa will mark the first time TOYOTA has entered three hybrid-powered LMP1 cars, with Stéphane Sarrazin, Yuji Kunimoto and Nicolas Lapierre competing in the #9 TS050 HYBRID.
Toshio Sato, Team President: “This has been a dramatic race but the first priority is José María and we are all relieved that he is okay after the accident. Despite our strong performance in qualifying, we knew that Porsche would be a much tougher opponent in the race. The whole team performed well and fought right until the chequered flag. Of course it is disappointing not to have two cars on the podium but I am proud of the team for their determination and fighting spirit today, particularly the mechanics who worked so quickly to get the #7 car back on track. Overall I am satisfied with our high-downforce TS050 HYBRID, which showed strong performance throughout this week. Now we need to fine-tune our package for Spa-Francorchamps when we look forward to again fighting closely with Porsche at the front.”
TS050 HYBRID #7 (Mike Conway, Kamui Kobayashi, José María López)
Race: 23rd, 159 laps, 6 pit stops. Grid: 1st. Fastest lap: 1min 39.656secs

Mike Conway (TS050 HYBRID #7): “Well done to the #8 crew on the victory; they did a great job. It was a good first couple of stints for me but we had an issue with the anti-roll bar so the car didn’t feel right. That affected Kamui’s stint and unfortunately José had an incident in the wet. I’m glad to hear he’s okay. The guys did a great job getting the car back out there so big thanks to the team for that. A tough weekend but we had a good car so now we look forward to Spa.”

Kamui Kobayashi (TS050 HYBRID #7): “Congratulations to everyone on the #8 car on their victory. Obviously we had a good start in qualifying and the first part of the race when we were leading. But during the last few laps of Mike’s stint we had an issue with the anti-roll bar. The car didn’t feel right and after I jumped in, it was not well balanced. It’s a pity because we could have had a good result. We showed our performance and we will come back for the next race.”
José María López (TS050 HYBRID #7): “The race started really well but then we had the anti-roll bar problem at the end of Mike’s stint. Kamui did really well to keep us in the race and I was so looking forward to getting in the car. It started raining and when I was going into Copse I had the problem. It was a little bit a combination of the anti-roll bar, the wet and I touched the kerb with my rear tyre. It was a big impact and at the beginning I felt some pain so I’m happy that all the checks showed no problems. Now I’m ready to come back for Spa.”
TS050 HYBRID #8 (Sébastien Buemi, Anthony Davidson, Kazuki Nakajima)
Race: 1st, 197 laps, 6 pit stops. Grid: 2nd. Fastest lap: 1min 39.804secs
Sébastien Buemi (TS050 HYBRID #8): “I am so happy with this win. It has been a long time since the last one on our car so it’s great to start the season like that. It was a tough race and really exciting at the end. The car was quick and during the last stint I was on fresher tyres so that was an advantage. When I caught the Porsche I knew it was my only opportunity as they were faster on the straights due to their low downforce package. So I had to try something and happily it worked out well.”
Anthony Davidson (TS050 HYBRID #8): “It’s amazing to finally get our first win together as a car crew. We really had to work for it today though; we did a great job individually and as team. We read the conditions correctly and made the right call on strategy in difficult conditions, although we were unlucky with the safety car timing. Séb was on fire at the end on fresher tyres. Kazuki and I were willing him on from the pits and he did an amazing job. We couldn’t be prouder to win this one.”

Kazuki Nakajima(TS050 HYBRID #8): “I am very happy to get this win with Anthony and Sébastien because it is our first win together, even though we have been on the same car since 2015. I am very happy to achieve that. The race was a lot more difficult than we expected; we were a bit unlucky with the safety car and it was difficult with the rain. I was happy with the car but Porsche also had good pace and made it very difficult for us. Séb did a great job in the end; we believed in him but it was exhausting to watch.”